They’re at the very front of the brain, in a region called the frontal pole that we know is involved in such tasks as processing social information and working memory. He has christened them FP1  and FP2

In the early 1900s, a neuroscientist called Korbinian Brodmann gave the frontal pole the name “Area 10″ when he published a series of maps of the brain. To map the anatomy in finer detail, Bludau took 10 post-mortem brains and sliced them extremely thinly — into 20 micron slices — before looking at them under the microscope and also digitally analyzing them. 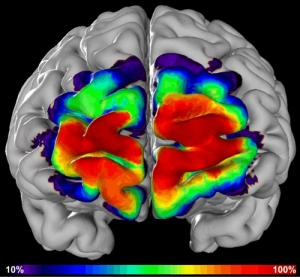 His work revealed a sharp distinction between the cells in the outer and inner parts. Overlapping this with functional information gave a pleasing match.

“Everybody knows the Brodmann areas are somewhat crude; but their borders usually link with the border between different functions,” neuroscientist Dr. Anders Sandberg of the Future of Humanity Institute/Oxford Martin School at Oxford University told KurzweilAI. “But neuroimaging has shown that there are indeed finer divisions that can be seen when doing different tasks. So in this case, the researchers demonstrated that there was an anatomic difference between the two functional areas.

“This is good news, since it suggests that the different functional areas actually are a bit distinguishable on the anatomic level and not just subtle network effects. It might of course turn out that the frontal pole is special, but I would guess we are going to see more data like this. Not detailed enough to make uploading easy (since the networks within cortical parcels still need to be traced out) but likely making it easier. Besides, the frontal pole is important and interesting on its own.”