Children who grow up in institutions instead of with families have major deficits in brain development, a study of Romanian orphans has shown.

The findings, published online Monday in the Proceedings of the National Academy of Sciences, underscore the importance of an enriched environment during infancy and childhood and may help explain the increased rates of depression and anxiety disorders known to exist among institutionalized children.

The report comes from the Bucharest Early Intervention Project, which has been following 136 Romanian orphans for 12 years, ever since the children were infants. The project is unique because it is the first to randomly assign children either to foster care or to the institutional care of orphanages.

Such randomization — ethically possible because all the children would otherwise have remained in institutions — has allowed the scientists to ensure that other factors, such as physical appearance or personality, did not affect whether children were chosen to join a family or remained in an institution.

Researchers at Harvard University, the University of Maryland and Tulane University worked with Romanian authorities to place half the children with families that had been rigorously vetted to ensure they would provide good homes. Since that time, most of these children have remained with their foster families. Children living with their biological families have served as a control group.

The team has published almost 50 research papers since the project began, showing that the orphans who remained in institutions have significantly more behavioral and neurological deficits than those who went to families: At age 4 1/2, more than 40% had anxiety disorders and 4% had major depressive disorders. Many also exhibited signs of autism such as “stereotypies,” repetitive behaviors such as rocking and arm-flapping.

In the new study, the team scanned the brains of 74 of the Bucharest children, now ages 8 to 11, using magnetic resonance imaging.

What they found was striking: Brains of children who had remained in institutions had less white matter — the type of tissue that connects different regions of the brain — than orphans who were placed in foster care or children living with their own families.

Reductions in white matter have been found in numerous neurological and psychiatric conditions, including autism, schizophrenia and attention deficit hyperactivity disorder, or ADHD.

Study senior author Charles Nelson, a developmental neuroscientist at Children’s Hospital Boston, said the white-matter changes were probably related to a difference that the scientists had noticed earlier in the project: Children in institutions had less electrical activity in their brains — specifically, a kind known as “alpha power” — than those who had gone to foster homes.

The observed brain differences seem to parallel some of the behavioral differences seen in the different groups of children — notably, higher rates of depression and anxiety disorders in kids who remained in institutions, Nelson said.

Perhaps, Nelson said, the children were placed in homes too late in life; deprivations they experienced before that time were profound. Children in the orphanages are often left in rooms by themselves for hours at a time with nothing to look at or play with.

“The brain needs stimulation to grow and develop, and we know the Romanian orphans are not getting that stimulation,” Nelson said.

The findings underscore both the potential for recovery from early-life isolation and the devastating reach social deprivation can have even if experienced only for the first few years of life, Nelson said.

Dr. Daniel Geschwind, an autism expert at UCLA who was not involved in the study, said the new report is “fundamental and foundational because it identifies clear structural abnormalities in the brains of these kids. Now we can ask ‘Why?’ What is it about these environments that alters brain structure and function?”

But even without that knowledge in hand, the findings should make U.S. child-welfare officials sit up and pay attention, Geschwind said.

“There’s oodles and oodles of information and data that points to really clear and obvious policy implications: [The] kind of environment a child has from zero to 3 and 3 to 5 is fundamental to their future,” he said. 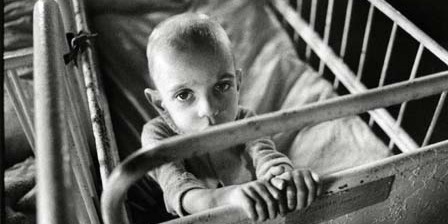